What’s growing up been like for you? Has it been a walk in the park (I highly doubt it) or a punch in the face? A bolt from the blue? A kick down the ladder? God, I feel like I can go on forever! I bet it has been the latter three, hasn’t it? This one is about the actual epiphanies that strike you in the process, the real realizations, the important revelations.

1. Growing up is realizing that you’re not ready for life, admitting to yourself that you can be cruel, too and that you’re capable of hurting people.

2. It’s looking back and finding a trail of people that you’ve left behind, some you’ll never be able to run to again

3. Growing up is understanding that you can’t scream “Mother!” Every time something goes wrong, and realizing that she, too, is a person with problems and issues that made her who she is and that maybe, just maybe for once seeing that she, too, needs help.

4. Growing up is failing over and over again until who knows when this train will stop and maybe you’ll one day get to see yourself in a better place, in a better state.

5. Growing up is anxiety, depression and a long wave of panic attacks followed by a brief period of normal breathing until the three hit again.

6. Growing up is trying hard to win that Oscar award for best actor/actress because God only knows how many times you’ve put a smile on your face when all you wanted to do was punch a wall until your arm went numb.

8. Growing up is forgiving those you couldn’t hurt back at the time and those who wronged you.

9. Growing up is letting go, letting go of a past that once upon a time meant everything to you and held you back for God knows how long.

10. Growing up is admitting that you’re human; with weaknesses, vulnerabilities and a tremendous

11. Growing up is realizing the necessity of the process of elimination; eliminating toxic people, eliminating bad influences, eliminating uncomfortable vibes.

12. Growing up is experiencing the long awaited epiphany that is the idea that you should never sacrifice your comfortableness for someone else’s happiness.

13. Growing up is cutting the last thread that’s been trying to pull you back in for so long, be it a dying relationship or an abusive friendship.

14. Growing up is realizing that you shouldn’t apologize for the things you want. That you don’t owe people explanations for your every step and every decision.

15. Growing up is surrounding yourself with fences, brick walls, iron shields and every single form of protection you can think of until you realize that the only person you’re bullshitting is yourself.

So, stop being too damn hard on yourself. We’re all still growing up.

Run For Your Life: 4 Types Of Men You Need To Run From!

Best Dating Spots around Cairo, According to Your Relationship Status

The Kingdom is launching a SR3 trillion plan with the aim of doubling the size of Riyadh in the next 10 years and to turn it into an economic, social and cultural hub for the region.

Fahd Al-Rasheed, president of the Royal Commission for the City of Riyadh, revealed the ambitious plan for the capital city ahead of key meetings of the U20, the arm of the G20 leaders’ summit that deals with urban development and strategy.

“Riyadh is already a very important economic engine for the Kingdom, and although it’s already very successful, the plan now, under Vision 2030, is to actually take that way further, to double the population to 15 million people,” he told Arab News.

“We’ve already launched 18 megaprojects in the city, worth over SR1 trillion, over $250 billion, to both improve livability and deliver much higher economic growth so we can create jobs and double the population in 10 years. It’s a significant plan and the whole city is working to make sure this happens.” He added.

The private sector alone is investing $250 billion, and the same amount has been collected from the increased economic activity from population growth, finance and banking, cultural and desert tourism, and leisure events.

“We must also ensure the growth is managed properly, so there will be a focus on transport and logistics, including the Riyadh metro which will open at the beginning of next year. The aim is to increase productivity,” Al-Rasheed said.

The plan involves the creation of a “mega industrial zone” that focuses on using renewable energy and biotechnology. In addition to using sustainability, with energy conservation, the circular carbon economy with its emphasis on reducing emissions, and water management, all priorities.

Three Women Elected As Board Members For the CFA Society

The CFA Society Saudi Arabia, a member of the Chartered Financial Analyst (CFA) Institute global network of societies, has elected a new board that includes three women joining the ranks of the nine-member board.

Marking yet another accomplishment for women of Saudi Arabia and proving their significant role in the workplace.

Due to the current situation caused by the pandemic, the voting was conducted online and proxy voting was not considered for 2020 elections. The voting closed at 5 PM on Sunday and voters picked 9 out of the 28 nominees.

Here are your new board of directors for the year 2020! 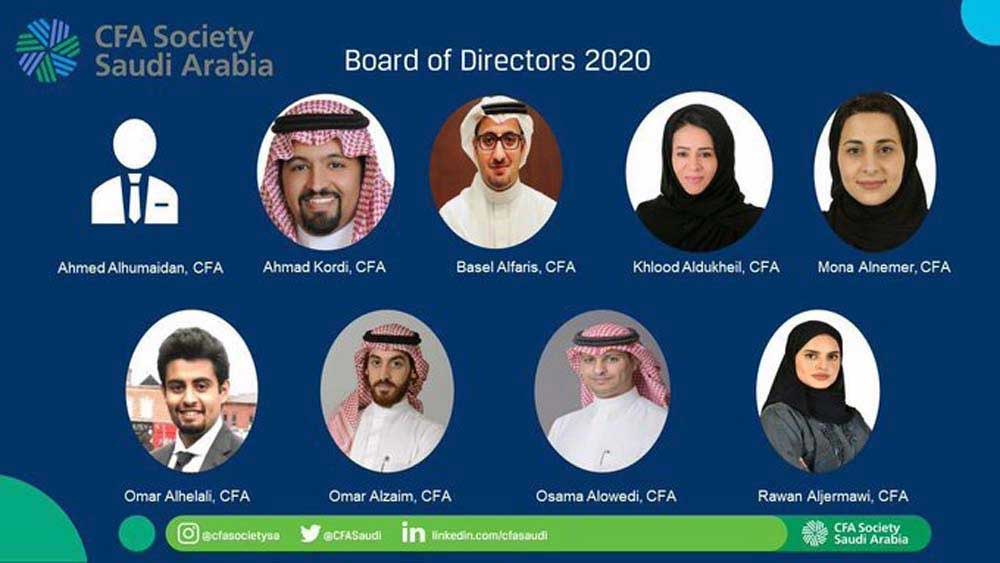 The staff and students at the British International School of Jeddah (BISJ) put together 323,103 caps to break the previous Guinness World Records title of 260,866 gained in the Netherlands. This falls as a part of an even bigger campaign! As the official attempt was to collect a massive amount of bottle caps for recycling, with the aim to donate the funds locally to support children with disabilities by buying items such as wheelchairs and leg braces for them. How incredibly considerate is this attempt?

Sonja Sutcliffe, deputy head of the BISJ, said: “We have tried to break the Guinness World Records title for over a year with an aim to raising community awareness of the problem of plastic pollution, especially in oceans.”

“We started by collecting as many bottle caps as we could, even cleaning up the local areas a little on the way.” She added. The school took a scientific approach to the challenge, in which it worked out the best ways to put holes in the caps and measure out fishing line to string them together.

“The message was to visually represent how many plastic bottles we use and see how the tops could be converted into specialized equipment for less-fortunate children. This is an amazing achievement of teamwork, vision, and resilience,” Sutcliffe said.

The final length of the chain was measured at 2,738.5 meters! Three Women Elected As Board Members For the CFA Society